GamiPress: An Overview and Review

Keeping your bounce rate down is important. Making sure visitors return to your site can be equally important. With both of those metrics combined (a user engaging with your topic multiple times), the likelihood of conversion is much higher than it would be otherwise. One of the most effective (and fun) ways to achieve this is to gamify your website. Using the GamiPress plugin, you can gamify your WordPress website in ways that are sure to bring users back. Not only because your products and services are top-notch, but because your website is just fun to use and because they feel invested in it.

Gamification is simply adding game-like element to your product, service, or website. You probably use apps that do this already.

You likely have a rewards app for Starbucks or another restaurant that rewards you for repeated visits. Fitbit and Garmin and other fitness apps do this by giving you badges you can share with friends to mark milestones you achieve. This is a tactic taken directly from video game consoles like Xbox and PlayStation. The rewards can be tangible like free drinks or cosmetic and functionally useless like badges and achievements.

Regardless, though, by putting in elements that users treat like a game, they’re more involved and having more fun. Rewards on any level also make things more fun. They make people want to interact, do what might be considered mundane tasks, but keep them motivated to reach that next rung on the ladder.

Why Does This Happen?

Why do people react this way? And why does it work? Because of science. Specifically, dopamine and your brain’s reward pathways:

In simplistic terms, activation of the pathway tells the individual to repeat what it just did to get that reward. It also tells the memory centers in the brain to pay particular attention to all features of that rewarding experience, so it can be repeated in the future.

Social media works algorithmically to take advantage of this (just one more funny cat video, then I’ll stop scrolling), and that’s where GamiPress comes in. You might want to add gamification to your WordPress site but have no idea how. There are enough add-ons to GamiPress that even if you’ve never dabbled in giving your audience a game-like experience, you will be able to dive right in.

Getting Started with GamiPress

Installing the base plugin for GamiPress is straightforward and easy. Find it on the WP.org repo and go through the normal steps.

You will notice that we have installed multiple GamiPress plugins, too. Those are also on the WP.org repo, and you can see them by a simple search for “GamiPress”. They’re all official plugins, and we chose the ones for this example that might be the most useful for most people, such as rewards based on user interaction with certain categories of posts, by sharing links to the site, clicking links within your content, playing videos or audio or other multimedia content on the site, and so on. 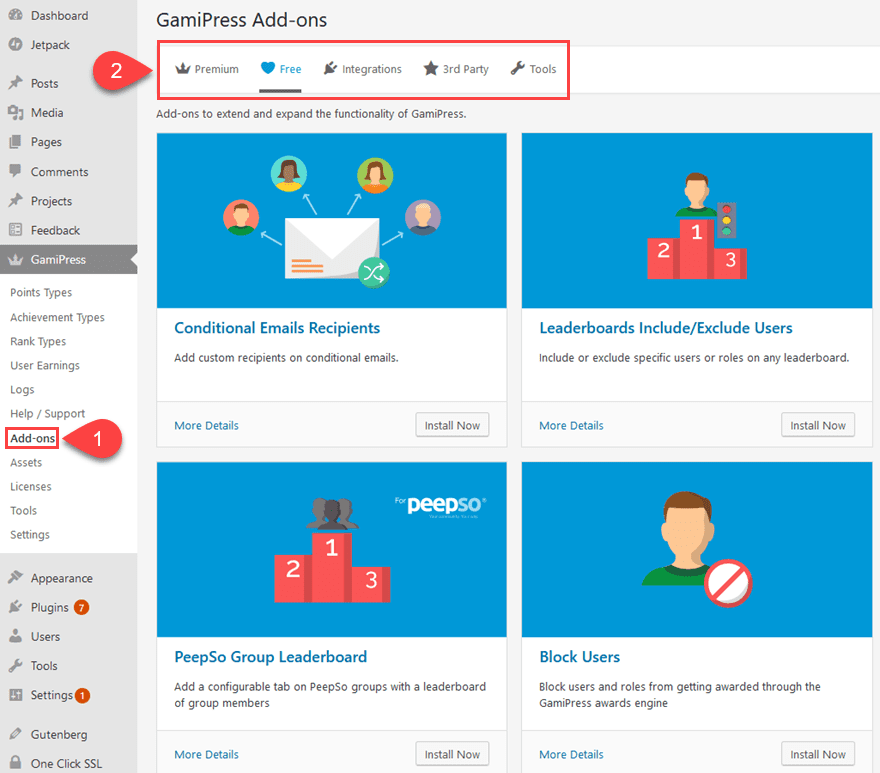 We will primarily be taking a look at the base plugin in this article, but at any point, you can find the entire add-on library under the GamiPress – Add-ons menu item in your WP dashboard.

The main navigation of the GamiPress menus brings you to the Points Types screen. This is the most fundamental part of the plugin system, and you can have any number of different kinds as you prefer.

These points can be used in multiple ways. The most common are as currency (to buy discounts from your store or new avatars for users’ forum accounts) or as achievement points (getting 500 points gets you X badge, 1000 gets you a special title, etc.).

For instance, the Rank Types menu option lets you set any number of different user ranks (based on the WordPress user roles that you set for the overall site).

These ranks then show up under the Ranks menu in the main WP dash menu (just above the GamiPress options). You can set these ranks to unlock with different points that you set up earlier.

While these ranks can be purely cosmetic and superficial, you can use the GamiPress add-ons to customize how users interact with the site. They can get additional permissions regarding the content. And there are even add-ons (free ones) that integrate with BuddyPress and such so that your users get additional perks and abilities in how they interact with your community.

Admittedly, the initial configuration for GamiPress can be a little overwhelming. We suggest that you look at the project from a high-level and divide it up into manageable parts. The Help/Support menu option is actually set up to help you do this. If there’s something you can’t find in the quick reference, the official documentation will expand on the issues.

For this overview, we’re just going to look at the idea of awarding Achievements. However, you poke around the official documentation, you’ll find a lot of expanded concepts, including their own concept maps of how things might work on your site. You can adjust point spends, discounts, and other stuff like that.

For us, though, we can get set up quickly by heading to the Achievements page and clicking on Add New.

When you publish this achievement type, you will have a new menu item appear in your admin dashboard, aptly titled Achievements and any types that you’ve created will appear as sub-items. Clicking into those gives you the option to see all of that type or create new entries.

Click Add New, and a post editor comes up with metaboxes (Block Editor-compatible ones). Fill these out with the varied details of how you want to show the user what they’ve accomplished. 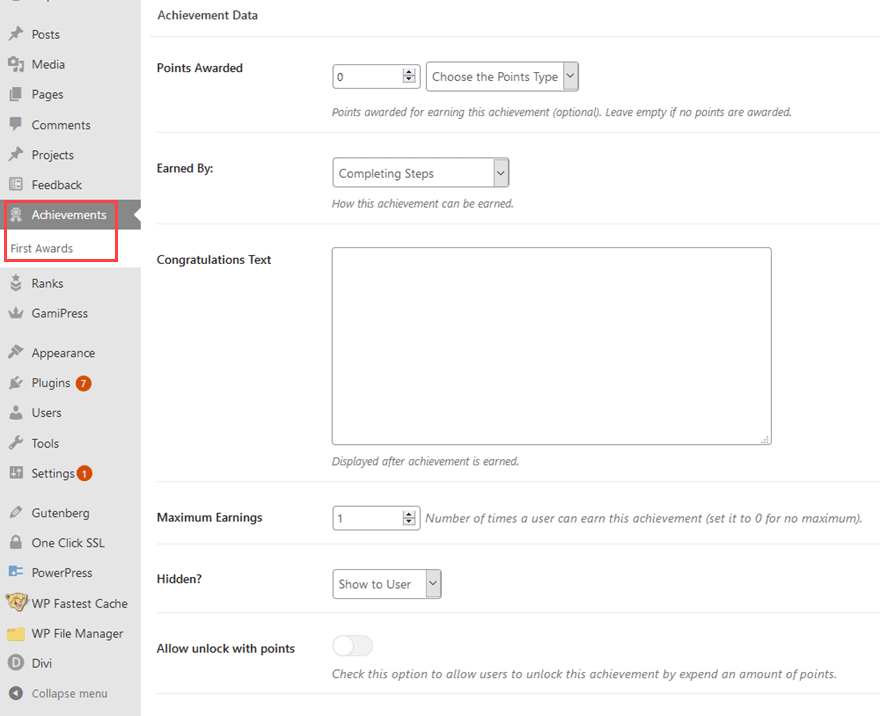 Oddly, you need to scroll down to the bottom of the page under these details to get to the box where you add the steps the user must go through to earn this achievement.

You can set dozens of triggers for the award. Such as just registering for the site, sharing a specific post, commenting, or just visiting the site in general. The level of gamification you include on your site is totally customizable. If you want nothing more than eyes on your site, you can set up your achievement system to reward that behavior and give your users those dopamine hits they crave.

When you go back to your achievement page, you can view all the details of that award in one spot.

If you want the user to get a notification on the site itself, you have to pony up some cash. That can only be done with the premium add-on called Notifications. But any user who hits any milestone you hit will be sent an email immediately marking the occasion. 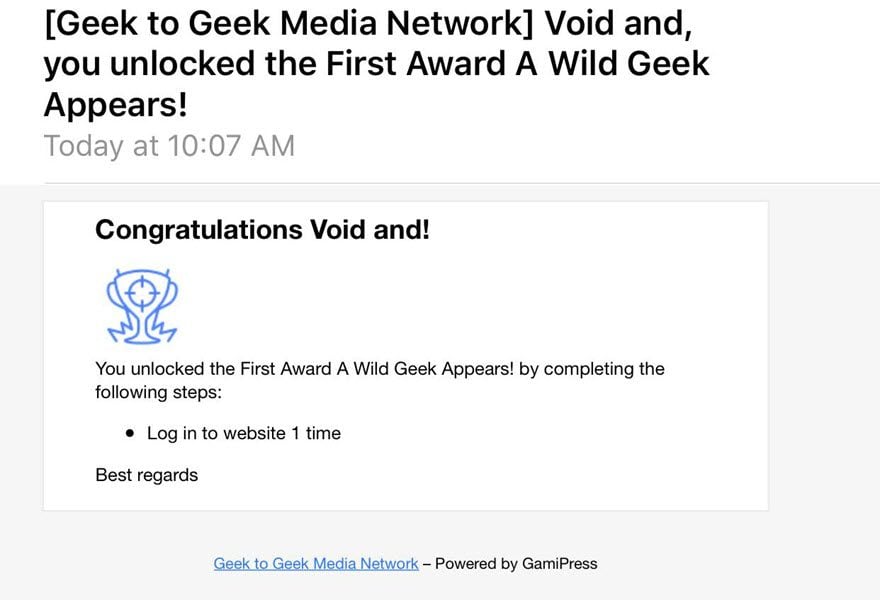 You can also display these on their profiles, host leaderboards, and do even more with various addons to GamiPress (mostly being free, too). Additionally, the User Earnings block in the post editor allows you to display the current user’s totals. 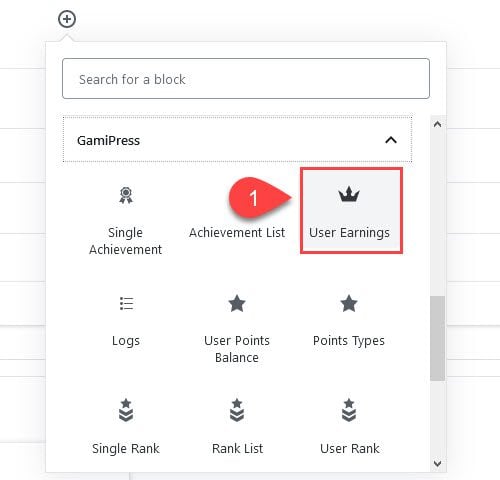 The same can be done with the GamiPress User Earnings widget and [gamipress_earnings] shortcode. It will change the contents depending on who is logged in. You can have a URL like example.com/achievements, and it will show a unique set of rewards to each person who visits.

Overall, GamiPress is incredibly robust. You have access to a vast array of options, even if you’re sticking to the free add-ons. If you never touch a premium one, you will still be able to lure users back to your site with achievements, points, discounts, and exclusive content that they can earn right alongside those scientifically proven dopamine hits.

What are your favorite types of gamification that keep you coming back for more?