Bitcoin and WordPress: Why and How to Take Cryptocurrency Payments

Bitcoin is the new hotness. It’s also the old hotness. Basically, it’s the hotness, and if you’re not already riding the cryptocurrency wave, there’s never been a better time to hop on. While the cryptocurrency goes up and down in value over the short term, its long-term value has only increased exponentially. Some folks see this growth as a bubble, but not like the dotcom bubble in the 90s or subprime mortgages. Basically, it’ll get more regulated. Maybe.

Regardless of all that, if you’re selling anything on your website, there’s really no reason not to take Bitcoin. I mean, in theory, if you sell something for $20, that revenue could end up being worth $30 tomorrow and $300 in a few weeks. (Or it could go the other way around and be worth $15 in a few hours–hence the bubble I mentioned earlier.)

With that in mind, if you want to really dig in and accept Bitcoin payments on your WordPress site–or just want to know more about cryptocurrency in general–keep reading.

Bitcoin is a cryptocurrency based on blockchain technology. I know that’s a lot of buzzwords that seem pretty cryptic (cryptic…get it?), but it really isn’t. Or it doesn’t have to be.

First of all, what’s a cryptocurrency? Technically, it’s money that has no backing in the real world. It’s all data. Scary as that sounds, it’s not. We deal with this kinds of economics every day:

If you take away all the noise around cryptocurrencies and reduce it to a simple definition, you find it to be just limited entries in a database no one can change without fulfilling specific conditions. This may seem ordinary, but, believe it or not: this is exactly how you can define a currency.

Take the money on your bank account: What is it more than entries in a database that can only be changed under specific conditions? You can even take physical coins and notes: What are they else than limited entries in a public physical database that can only be changed if you match the condition than you physically own the coins and notes? Money is all about a verified entry in some kind of database of accounts, balances, and transactions.

Which is where blockchain comes in. It’s a better way of keeping up with those accounts, balances, and transactions than the current DB structure that’s used by pretty much everyone.

A while back, Nathan and I were doing a This Week in WordPress stream (Fridays at 3pm Eastern on our Facebook and YouTube channels!), and one of the articles we discussed was about how important blockchain will be moving forward.

The problem was that neither of us could explain blockchain. We both have a fundamental grasp on it, but expressing anything beyond that was, well, beyond us. Luckily, other people don’t have that problem. So watch this video, and you’ll be fine.

Bitcoin, being a part of blockchain, is a pseudo-anonymous currency. You only have to give your identifying information when trying to cash out. If you’re only going to be trading Bitcoin for Bitcoin, you can be as shadowy and mysterious as you want. The information is stored digitally within wallets that are encrypted and–because of blockchain’s organization and ledger-keeping–incredibly secure against fraud and chargebacks.

Clear as mud? Awesome. Let’s get to taking Bitcoin payments with WordPress!

Bitcoin Payments and You

There are two kinds of WordPress ecommerce people: those who use WooCommerce and those who don’t. I don’t say that in a mean way, but Woo is pretty much the 800-lb gorilla of the WP sales space. So when you think about taking payments for one reason or another on your site, you gotta have something that either integrates with WooCommerce or at least lets you put the separate payment option near it.

That’s why I think that the GoURL Bitcoin Payment plugin is the best way to go if you’re going to start taking cryptocurrency on your site.

For starters, it’s free. We love free, right? Well, GoURL takes 1.5% out of most currencies other than Speedcoin, but that’s still cheaper than other processors.

It’s all open-source. As WP folks, that should be music to your ears. And most importantly, there are 11 add-on plugins you can get for it that integrate into all sorts of payment gateways and ecommerce solutions.

WooCommerce? Check. Easy Digital Downloads? Check. Paid Memberships Pro, Paypal Donations, and BBPress? Yeppers. They even give you the PHP so you can put the option at any checkout or in any plugin you want. 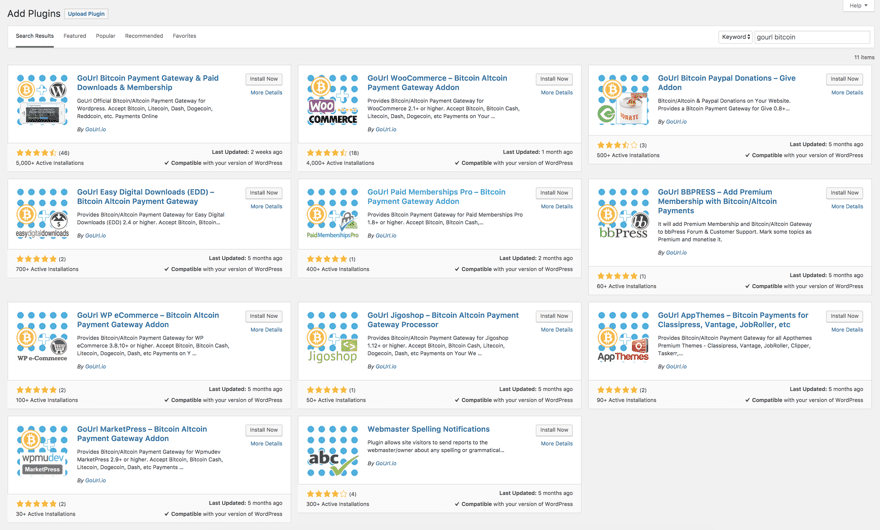 Like everything else in the world, you gotta set up an account. It’s really easy to do, and there are links all over the GoURL backend directing you there. In fact, you have to do it before you can even access the settings pages.

Once that’s handled, you will get to a pretty standard dashboard. 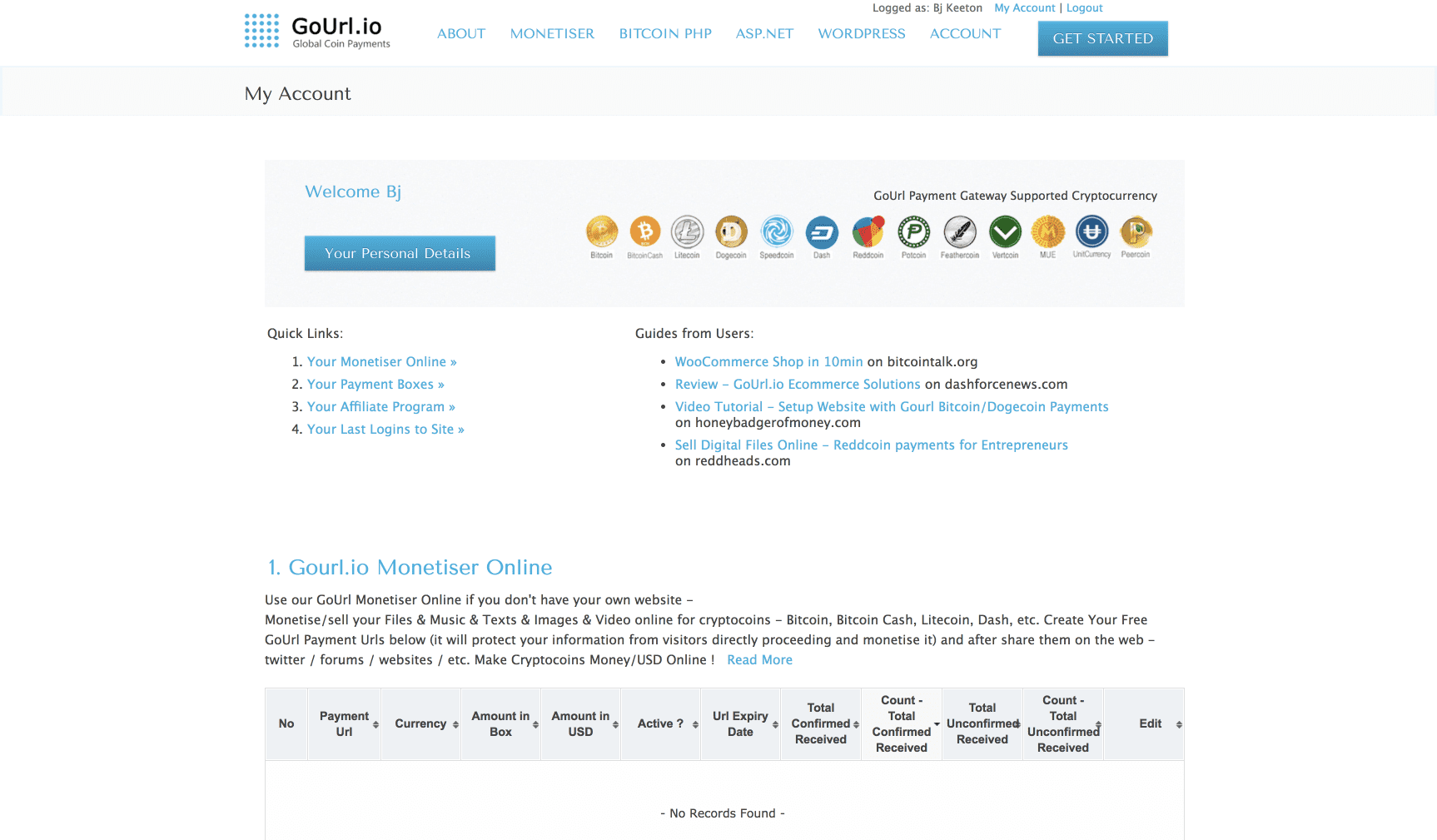 The real fun begins as you scroll down the page and see that you can set up different payment boxes. This is why you need the GoURL account. Basically, you’re using GoURL as an intermediary. They store your wallet information in a secure payment box, process the transactions, and then send your Bitcoins to you within half an hour. Good stuff.

Setting up a secure payment box is easy, and they walk you through every step of the process. If you have no idea what an external digital wallet or private key is, that’s okay. Not only will you know after this, but you will also have at least one of your own! 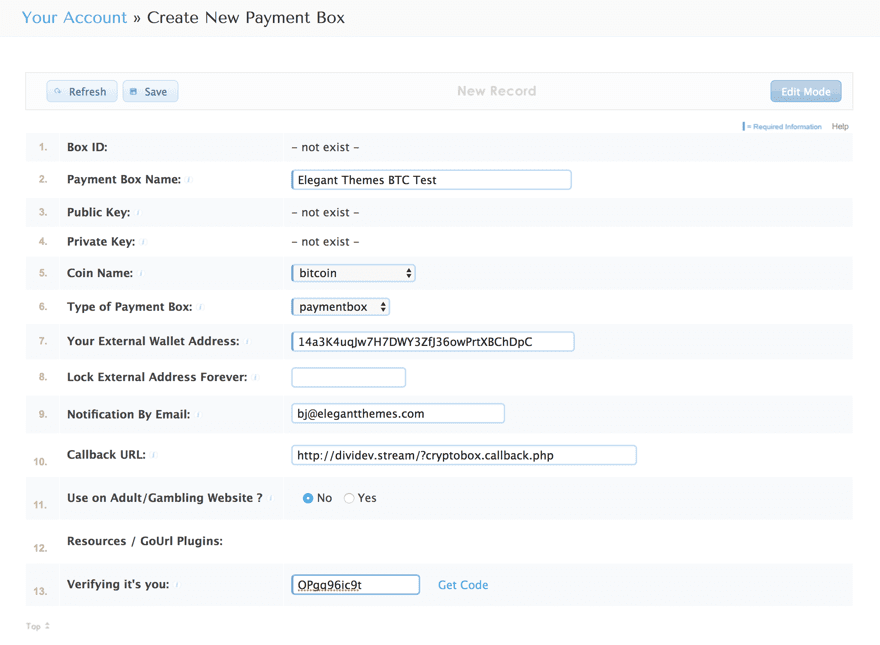 When that’s saved, you will get your public and private keys for your GoURL payment box (basically, the secure ID numbers for their software). If you have ever used an API key, you use these the same way.

Now you can head back into your GoURL Bitcoin -> Settings menu option and copy/paste the keys for the payment box you just set up.

You are ready to start taking payments. Because of how the service is set up, you have one of two options to actually take Bitcoin (or other cryptocurrency payments).

Both of which work pretty much the same way: they add a new payment option at checkout. This image is from the WooCommerce add-on, and it took no additional setup outside of activating the plugin.

Money of the Future?

Regardless of where you fall on the cryptocurrency and Bitcoin spectrum, I think it’s pretty safe to say that the more options you have for people to give you money, the better. And when that money has the potential to exponentially grow in value, you might as well grab yourself a couple of plugins and let people hand you digital riches.

Do you accept Bitcoin or other cryptocurrencies on your site? Why or why not, and how do you do it? Let us know and learn from each other!