Here’s the Average WordPress Developer Salary. Is It Fair?

No matter what field you’re working in, you should always keep an eye on the industry to know what people are getting paid. For that reason, and because most of us work with WordPress professionally, we thought it would be helpful to take a look at the average WordPress developer salary for both yearly and hourly rates.

Accurate WordPress developer salaries that apply to everyone can be difficult to figure out because of some confounding factors, but I’ll do my best to give you worthwhile published numbers of what WordPress developers are making nowadays.

Before I get to the actual numbers, I want to start with a quick discussion of why it can be hard to pin down a single, accurate number when it comes to WordPress developer salaries.

Everyone offers value to the WordPress community, but the jobs and skill level requirements are different enough that lumping everyone into the same category muddies the waters when it comes to salary talk.

WordPress is a Truly Global Community

While plenty of industries are going global to a certain extent, I think this is a distinctly WordPress thing because WordPress, as a community, tries to be more global.

There are WordCamps all over the world and it’s common for most WordPress businesses to be fairly accepting of remote work. So it’s totally possible for one company to have employees on three different continents, which means salaries can be tough to pin down.

The Vagaries of Salary Estimates for Every Job

Beyond the two WordPress-specific complications above, you also run into the issues that apply to every single job out there.

Same goes for devs who gets 2-months of paid vacation and equity in the company. They probably won’t make as much as someone whose compensation package is more salary-focused.

What the Data Says About WordPress Developer Salary

Apologies in advance for being a little geocentric when it comes to yearly salary. The fact is; most of the published data for yearly salaries is for USA-based WordPress developers. International data is either non-existent or, more likely, hard for me to find because of language barriers.

For WordPress developer hourly rates, the rates quoted are much more global (which you’ll see because of the huge ranges).

WP Engine has put together what is by far the best look at WordPress developer salaries in the USA. Pulling data from Indeed.com, they analyzed thousands of different job postings. Here’s what they discovered:

There’s one important caveat about WP Engine’s numbers, though. They come from job postings, not from actual working WordPress developers. As I’m sure we all know, “what you want to pay” (the listed salary) doesn’t always match with “what you have to pay to get talent” (the actual salary).

PayScale from Human Capital backups WP Engine’s findings, though, marking the median national salary for USA-based WordPress web developers as $50,541. WordPress developers with titles like “Front End Engineer” and “PHP Developer” were able to bump their median salaries up to $57,158 and $59,721, respectively.

Indeed’s own salary estimate tool puts the average WordPress developer’s salary in the USA at $71,758. This number is from 2017, whereas WP Engine’s analysis was from 2015, which might explain part of the difference.

To sum things up, we have:

As I’m sure most readers of this blog know, it’s quite common for WordPress developers to freelance on their own. And if you’re a freelancer, your work is going to always boil down to a defined hourly rate.

That is, even if you bill per project, you’ll still typically have at least a target hourly rate in your mind.

So…what is that WordPress developer hourly rate, on average?

Again, WP Engine looked at this number. Pulling data from eLance, they found that the majority of WordPress freelancers charge $20 per hour or more. Keep in mind that this is all freelancers including, but not limited to, developers. 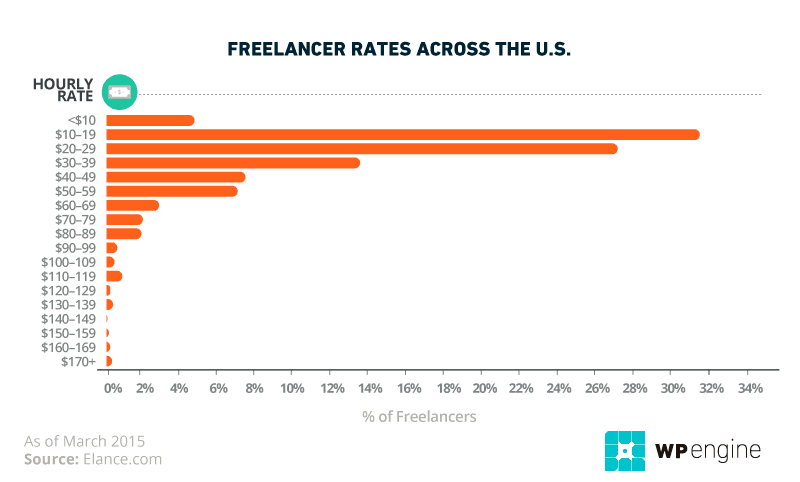 Freelancer Rates Across the U.S.

That number certainly seems low for a developer. So, let’s look at the published rates from some of the freelance marketplaces where WordPress developers hang out: 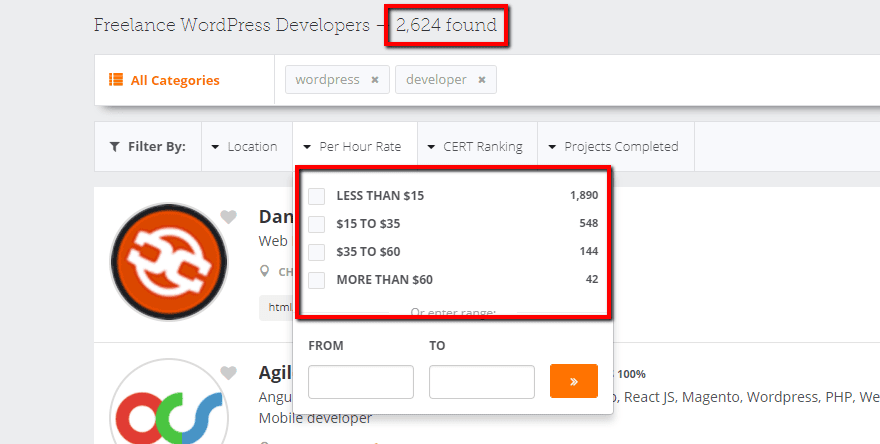 Is that what all WordPress developers make per hour? Or is that what you should charge? Not necessarily. We’ve talked a lot about setting prices as a freelancer, how much WordPress websites cost, and how much to charge for Divi websites.

And the fact remains that experience and how you market yourself will play a big role here. For example, Brian Krogsgard gives the hourly range for freelance WordPress developers from $25 per hour for beginners up to $400 for specialists.

I think the takeaway is this:

While the average WordPress developer hourly rate might seem low, there’s plenty of room to make a good hourly rate. Especially, if you have the skills and market yourself well.

Andy Adams has a great post on the difference between WordPress developers and Rails developers, in which he talks about how the industry treats hourly rates between the two.

Additionally, Tom McFarlin has a series of posts digging into the issue, as well as his thoughts on three things that hold WordPress developer salaries down.

Personally, I don’t know enough about the issue to make an educated claim one way or another. Since, we have a massive community of WordPress developers right here, I would be interested in hearing your thoughts.