A Look Into The Future Of Web Design: Where Will We Be In 20 Years?

I have to admit, writing a post that claims to make accurate predictions about what anything, let alone something as rapidly innovative as web design, will be like in 20 years is probably impossible. Except, perhaps, if I limit myself to broad predictions in line with current breakthroughs that have yet to take hold on a large scale. Which might sound like cheating, but it’s actually following a pretty well established pattern of technological innovation and adoption.

In general, new technological breakthroughs take about 20-30 years before they are broadly adopted as the new norm. Ironically it is at that point, 20-30 years later that they become widely know as “the next big thing” even though they’ve been around for quite some time in limited circles consisting of inventors, theorists, and advanced research labs like the MIT Media Lab or DARPA (Defense Advanced Research Projects Agency).  A few good examples include: the internet itself, email, and wearable computers.

The Internet began as the ARPANET in 1969 but it wasn’t until the 1990’s(a little over 20 years later) that it became the big new thing that every business and individual was learning about and connecting to.

Similarly, the first hosted email service was MIT’s CTSS MAIL in 1965. It wasn’t until the early 1990’s that email services for the general public began to pop up and become the new standard of business and personal communication.

And finally we have wearable computers. These began with Dr. Steve Mann who was building wearable computers in the 80’s (in high school), joined the MIT Media Lab in 1991, and with new help and resources continued building the discipline until it has begun to penetrate the broader popular market with products like Google Glass and the Apple iWatch, among many others to come. 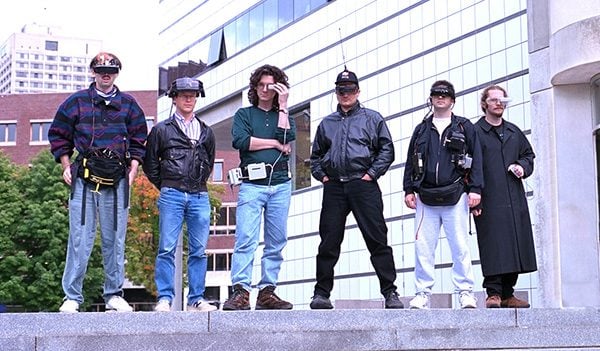 As you can see from the images above, there was a long process of iteration and refinement in wearable computers before we got to where we are today. Design of course is a huge part of this process, but in a purely aesthetic sense is not a top priority until the technology itself has proven itself.

To give a WordPress example: we’ve all seen plugins that start out functioning fine but look ugly that over time get updates to their design that make them both highly functional and quite beautiful. In this way, design is even farther behind the curve than the technology we’re adopting some 20-30 years after it was invented.

This is why in the section below, before we get into the concepts and ideas that might dominate web design in 20 years, I’d like to explore the intimate connection between web design and its dependent technology–computers.

Understanding the Intimate Connection Between Web Design and Computing Itself

Right now there are a few dominate trends in web design: responsive design, single page design, card design, and material design. These trends are all responses to the technology we use to interact with our content such as desktop and laptop personal computers, phones, and tablets. All of which use glass displays that mimic physical documents in a digital manner and which, on a fundamental level, have not significantly changed for decades.

So what happens when computing as we know it changes dramatically, perhaps even ditching the screen interface altogether? We might be close to finding out. According to many computer scientists and technology enthusiasts we are rapidly entering The Age of Context.

The Future of Computing: Context

According to the recent book by Robert Scoble and Shel Israel mentioned above, The Age of Context (2013), there are “five converging forces [in computing] that promise to change virtually every aspect of our lives.” They are mobile, social media, data, sensors, and location-based services. The point at which they converge and give birth to a new age of computing is, you guessed it, context.

But what exactly does that mean?

Contextual computing means that our technology understands us, our needs, and our environment to such a degree that it can seamlessly integrate into our lives in previously unimaginable ways.

Ovens that recognize the food that is placed inside them, know how the person putting the food in it like that particular dish cooked, and then do it automatically. Fridges that recognize when you are almost out of staple items and orders them for you. Virtual Assistants that actually learn the ropes of your business just like a real person might in order to help you respond to emails, invoice clients, and much  more.

To one degree or another, all of the things I just mentioned are actually possible right now. Contextual computing on a commercial level is already taking place, but its not very wide-spread just yet. In the next few years I would expect that to change.

When it comes to web design, there is already one standout example of how contextual computing is being put to use. A new website building service called The Grid offers its users websites built using artificial intelligence that alters your design every time you add content to make sure it is optimized for your specified purpose; such as art portfolio, lead gathering, sales, etc.

In my opinion the logical development path for this type of technology would be to increasingly incorporate knowledge of specific consumers as well–not just the preferences of the site owner. If one person’s web behavior shows a 90% conversion rate in response to a certain type of web design then the site will appear one way to them but in a different, yet equally optimized way, to another visitor so that every single viewer sees exactly what they need to see in order to illicit the desired response.

But what happens when, as I mentioned above, we do away with screens altogether? What happens when “wearables” stop being devices and simply become parts (or at the very least extensions) of our bodies that interact directly with our brains? That’s what the founder of MIT Media Labs Nicholas Negroponte thinks might happen and he’s got a pretty good track record with these kinds of predictions.

What Will Be Possible 20 Years From Now?

In the video above, Negroponte proposes that in the relatively near future (20-30 years from now) we may be interacting with or even absorbing information in fundamentally different ways than we do today. Such as nanobots in the form of a pill that can place data directly into our brains via the bloodstream.

In this scenario, or any biotech approach, computers as we know them are no longer in the picture. There is no need for a web page design (or designer) because there are no web pages. Instead of networking computers, we may be networking humans.

Or at least this is the kind of thing that will likely be possible. There is a massive variety of outside factors could influence the development (or lack thereof) of this type of technology. We might see laws passed that prohibit this kind of advancement. We might see something completely novel and unexpected take us in a different direction entirely. We might decide as a culture that the economy is best served by postponing the commercial use of certain tech. Or wide variety of other things.

All of that said though, I wouldn’t count on web pages as we know them today being around in 20 years. Whether the content we view is designing itself specifically for us or we are simply uploading new information to our brains matrix style, web pages (and therefore web design as we know it today) has an impending expiration date.

Where Does This Leave Web Designers in the WordPress Community?

I don’t see any other way of putting it, so I’ll just say it. If you’re a web designer you’ll probably have to get another job. But don’t worry, so will content writers (like me) and a whole slew of other people. As conscious computing and contextual computing get more and more advanced, it will drastically change the way we create and interact with content/data forever.

WordPress itself will have to change. If it exists at all in 20 years it will be nothing like it is today. If the current direction of WordPress is to morph into an application platform or an operating system for the web, then 20 years from now will take us quite a few steps beyond either of those.

WordPress, in whatever form it takes (or whatever takes its place), might be an open source tool for displaying contextualized content in ways we haven’t even begun to think of yet. As someone who makes a living using and writing about WordPress, that’s kind of scary to think about. But exciting too! After all, we’re not all going to be plopped down in the future with only the knowledge and experience we have now. Instead we’ll be along for the ride, adjusting to and contributing to innovation as it happens, helping to shape the future just as much as it will shape us.