WordPress is famed for its versatility. With tens of thousands of themes and plugins available online, you can build a feature rich website using WordPress with no knowledge of coding. Of course, if you want to use themes and plugins to build your website, you are restricted to what solutions are already available. If no such solution exists, you will need to customize your website yourself.

You could learn how to do this by following step by step tutorials and referring to resources such as the WordPress Codex. You could also ask for help from WordPress support websites like WordPress Development Stack Exchange.

For complex projects, you will need to find a good WordPress developer to help build the website you desire. The price you pay a developer depends on the difficulty of a project, their experience, and what country they are located. While a higher price is no guarantee of quality, you should be wary of developers who quote prices that are too good to be true. Check out similar projects listed on job boards and freelance marketplaces to give you an idea of how much a particular job should cost.

In this article, I would like to share with you some websites that will help you find a good WordPress developer for your project.

WP Hired is a job board that publishes WordPress related jobs on a daily basis. They cater for part time, full time, freelance, internship, and temporary positions. Jobs are categorized into bloggers, designers, developers, and SEO.

It is 100% free to post jobs and reply to job offers. All of their jobs are also promoted to their followers on social media. 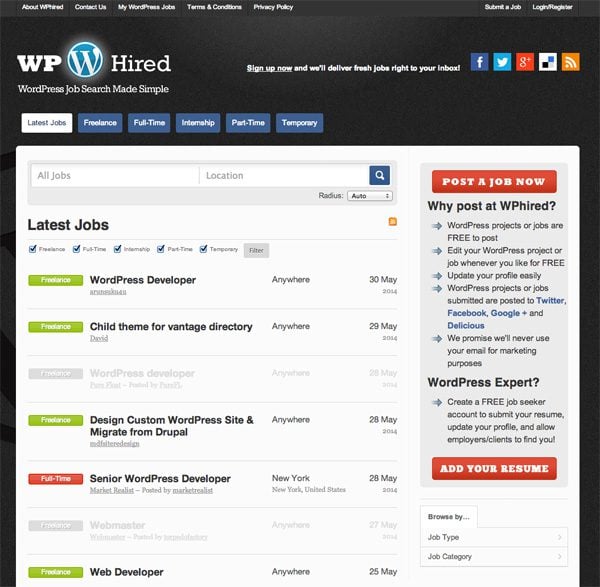 WP Hired is a free WordPress job board that is frequented by many WordPress developers.

WordPress.net is the official job board from the developers of WordPress. A wide number of positions are advertised including website migration, theme development, plugin development, and design and development.

It is free to post jobs to the board and its affiliation with WordPress.org ensures that a lot of people will see your advertisement. 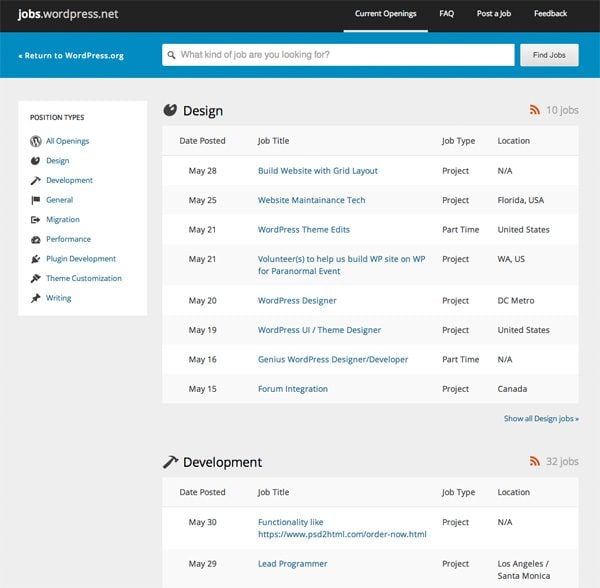 The WPMUDev job board publishes WordPress development requests every day. Jobs detail the project budget and the due date for the project.

To publish a job advertisement, you need to sign up as a WPMUDev member. This currently retails at $39.60 per month. A lot of great WordPress developers look for work on their board, so this could prove to be money well spent. 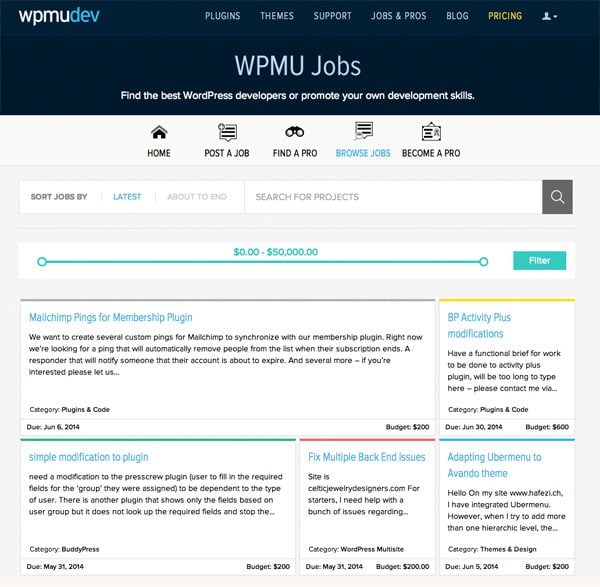 A lot of great WordPress developers can be found on the WPMUDev job board.

The Smashing Jobs job board publishes design and development jobs every day. All positions are advertised as freelance or full time. 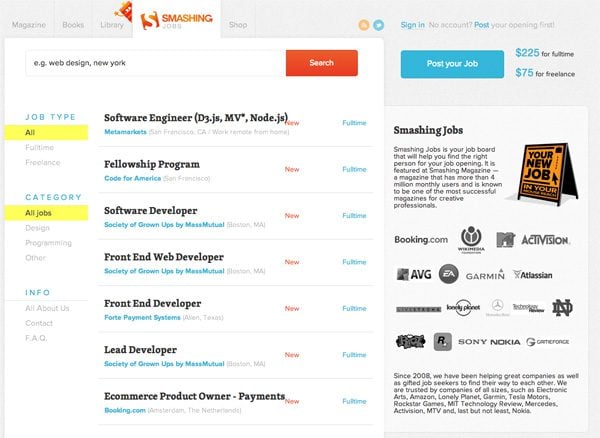 Many large companies use Smashing Jobs to find designers and developers.

Tuts+ Jobs replaced the old FreelanceSwitch job board. Jobs are advertised on a contract, part time, or full time basis.

For the time being, it is 100% free to publish a job offer; however the cost will soon rise back to $99 per listing. 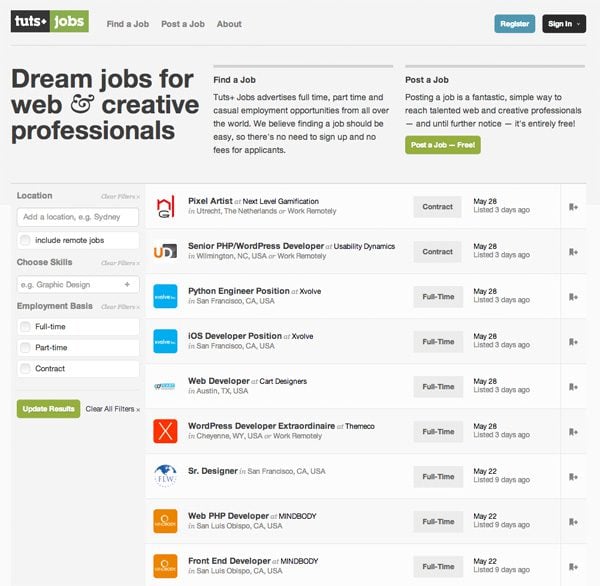 Simply Hired is a huge job website that has regional websites across the world. They charge $99 to post a job advertisement for thirty days.

A number of tech job boards are powered by Simply Hired. For example, Sensational Jobs pulls related design and development jobs from the Simply Hired database. 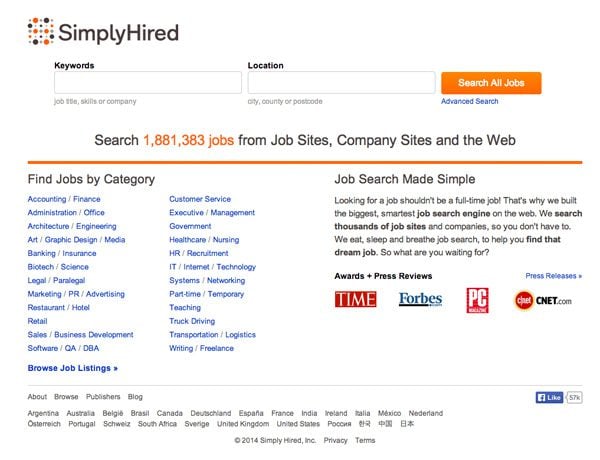 Simply Hired has a huge audience for you to advertise your job offer.

Krop is a job board that is popular with designers and developers alike. It is mostly used to promote ongoing freelance and contract work; rather than small one off projects.

It costs $199 to post a job advertisement for thirty days. Be prepared to pay a good rate as the standard of developers is very high. 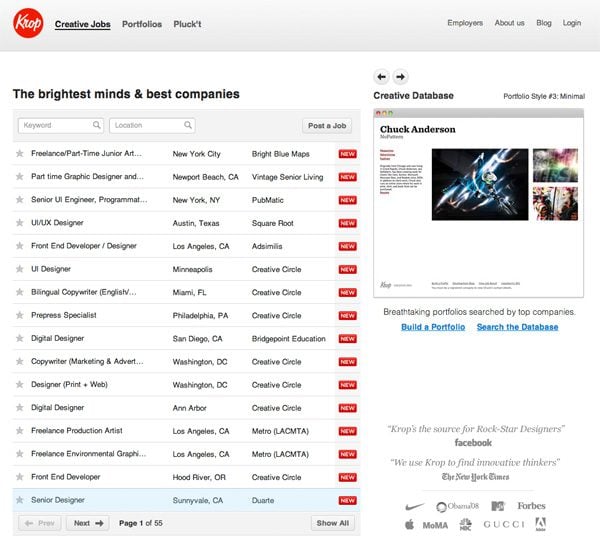 Krop attracts a lot of top designers and developers

With over ten million users, Freelancer is by far the most popular freelance marketplace online. It gained this position in just a few years by acquiring several large marketplaces such as GetAFreelancer.com and ScriotLance.com.

Freelancer’s pricing policy is a little sneaky. When you attempt to publish a job, you are advised that they only charge 3% of your project cost as a fee. You can only receive this price if you choose their premium membership plan of $199.95 per month. Their standard membership plan at $24.95 per month charges a commission fee of 5%. 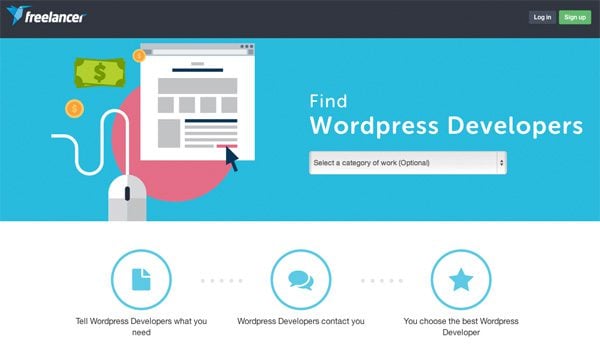 Freelancer is the biggest freelance marketplace on the internet.

Founded in 1999, eLance is one of the most well known freelance services online. It is used by hundreds of thousands of designers, writers, and developers.

There is no fee for posting jobs, however freelancers will have 8.75% of the total cost of the project deducted from their earnings. Membership plans are available that allow employers and freelancers to promote themselves better on the marketplace; however the fee remains at 8.75% for all freelancers. 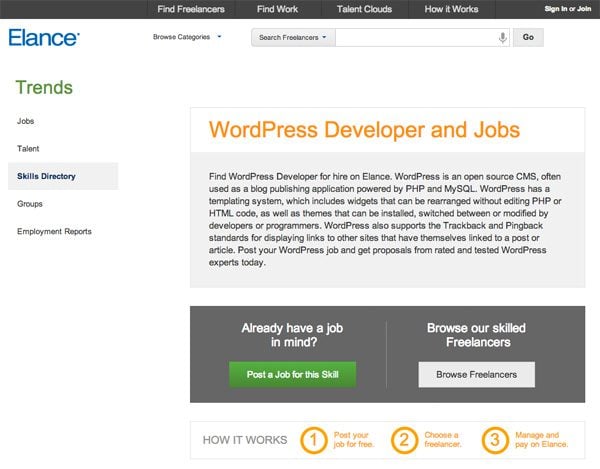 eLance has been operating online for fifteen years.

The Odesk marketplace was created as a way for businesses to hire remote workers. It merged with eLance at the end of 2013, however both websites continue to operate separately.

It is free to post a project on Odesk, though freelancers have 10% of their earnings deducted as a fee. Therefore, if your project costs $500, the freelancer’s take home pay would be $450. 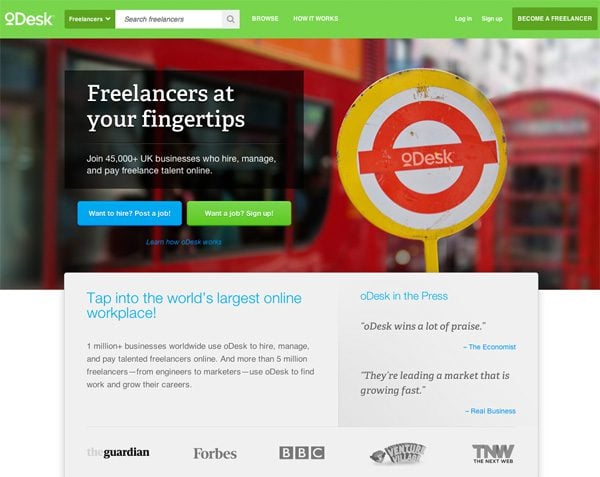 Odesk has a good reputation among developers.

PeoplePerHour is a UK freelancing marketplace that supports payments in UK Pounds, US Dollars, and Euros. They have an interesting option called hourlies that allows you to post small tasks for developers to complete quickly.

Posting a job offer is free, with the cost of doing business being absorbed by freelancers. They have a unique way of charging freelancers that encourages them to use their service every month. Rather than charge per project, they charge freelancers 15%, excluding VAT, for the first £175, $280 USD, or €210, billed that month. After that, they are charged 3.5% plus VAT for all remaining projects. 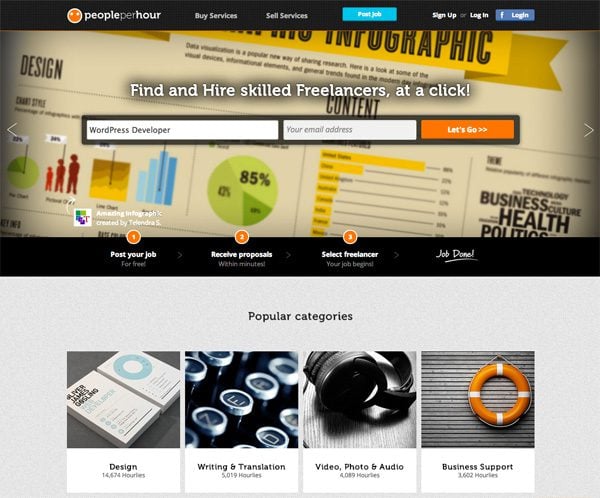 PeoplePerHour have a unique pricing structure that sets them apart from competitors.

Originally launched as eMoonlighter.com back in 1998, Guru is a freelancing marketplace that focuses on development, design, writing, IT, and admin.

It is free to post a job to the Guru marketplace, however there is a $29.95 upgrade option that marks your job advertisement featured. This apparently increases bids received by 50%. Freelancers have a 8.95% fee taken from their earnings. This can drop down towards 4.95% if you purchase a premium membership. 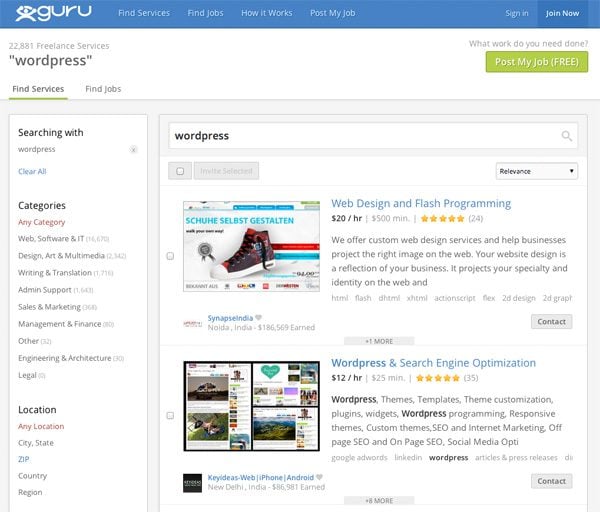 Guru is a great place to find an affordable WordPress developer.

When you post your job description, try to give as much information about your project as possible. This will help applicants know whether they are suitable for your project and save you from answering unnecessary questions.

Please also remember that in freelance marketplaces, reputation is everything. You can rate the quality of service received by freelancers, however they can also rate you. It is therefore important to remain polite and professional at all times; even when they are not. If you mess around a freelancer, their bad rating of you could scare other developers from ever working with you.

If you know of any other great places to find WordPress developers, please share them in the comment area below 🙂