This post is part of our Customer Spotlight series. If you have an interesting story to tell and would like to share your experience with WordPress and Elegant Themes on our blog, please contact us!

From Poultry To Web Development

That’s right. Only 3 months ago I was still working as a hardcore trader for a large poultry exporter here in the Netherlands. Buying, selling, trading meat was part of my daily routine, but the greatest thing was to go back home, usually late at night, so I could get back to work on my internet projects. Before selling chicken, I worked at a postal company, before that I sold printers and desks. All fairly enjoyable jobs, but not at all what I actually wanted to do.

One of my greatest hobbies has always been creating websites. Not for money, not for others, just for fun. But at some point in 2009 I figured it would be great to actually share content and attract visitors. You may or may not know that getting visitors on your website is addicting as hell! Suddenly my gaze went from pure design towards creating content and it didn’t take long until I discovered WordPress and the great selection of free and premium templates that came with it. That definitely saved a lot of time towards creating something new. Several theme designers and marketplaces got my attention, but Elegant Themes has always provided such a high level of quality and support that I have always followed their movements.

Where Were You When..?

Ideas for new internet experiences have always raged through my mind, without much result other than some fairly successful websites over the years, but approximately one year ago it hit me: “Where were you when..?”

It struck me as odd that I couldn’t find any large website that focused on people’s memories of these large events that just get stuck in your mind and I felt it should be my quest to create such a site: “Memstories” was born! Well, conceived, because the actual beta version has only been launched last Tuesday.

This delay of 12 months was mostly due to my inability to accept that I should quit my job and start my own company. You know, the financial crisis and all, it just makes things more complicated. Or does it?

Because, when my boss at the poultry company told me that they couldn’t extend my contract in October, it took about two seconds for me to realize that this was the push I needed: I was going to start my own company! The official registration of Strapless Media followed and I could finally work on my websites full-time!

“Who or what is Memstory?!” you may ask. It’s actually the word for that very detailed memory you have of a couple of key events in your lifetime. Think about it by asking yourself the following questions and trying to remember where you were:

Depending on your age, where you live and other randomness, such events get stuck in your brain and you can recollect and visualize a huge number of details as to what happened around you.

Memstories.com is all about these recollections. Sharing your Memstory about key events in our lifetimes and socializing about it (I call it Memstorizing). Usually you have these conversations in the pub or at parties, why not converse about it online! 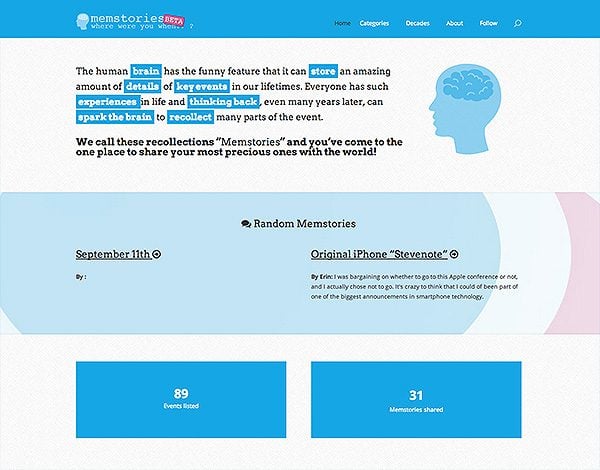 Each key event, which can be virtually anything between the year 1900 and today, gets its own page, some quick facts about what happened and four distinct ways to Memstorize. For example:

In this way you can even honor your grandfathers legacy by sharing his stories about how he fought during D-Day.

Luckily I had some help from my friend Mike (who owns a company called YearOne) who could help me with the comment system barriers I hit. He made the new system work so that each comment can be styled in a particular way, simply by clicking on one of those Memstorize buttons!

So the plan and functionality for the project was there, now for the design.. I worked with a couple of premium themes from other designers and it just didn’t add up to what I had in mind. The design was either not what I could get used to or the coding was so incredibly heavy that it was just not workable. Especially considering this site will soon attract about a billion daily visitors.

Divi, The Light Of My Life

It’s funny how I had been working with Elegant Themes as an affiliate for all this time, but never actually became a buying member. The selection of themes was already outstanding at the time, but it couldn’t be incorporated the way I wanted to. This all changed in December 2013 when these true geniuses released Divi, the most versatile, beautiful, solid and easy-to-use premium theme I have ever come across. Divi had to be mine and it had to become the new template to finally speed up and finish this slowing project.

Four weeks of tweaking and customizing later, I grew the nuts to finally release a beta version of Memstories.com, which I hope to help grow towards great heights. A large part thanks to the great people at Elegant Themes and the awesome support I have been getting in the support forums. Hats off for them.